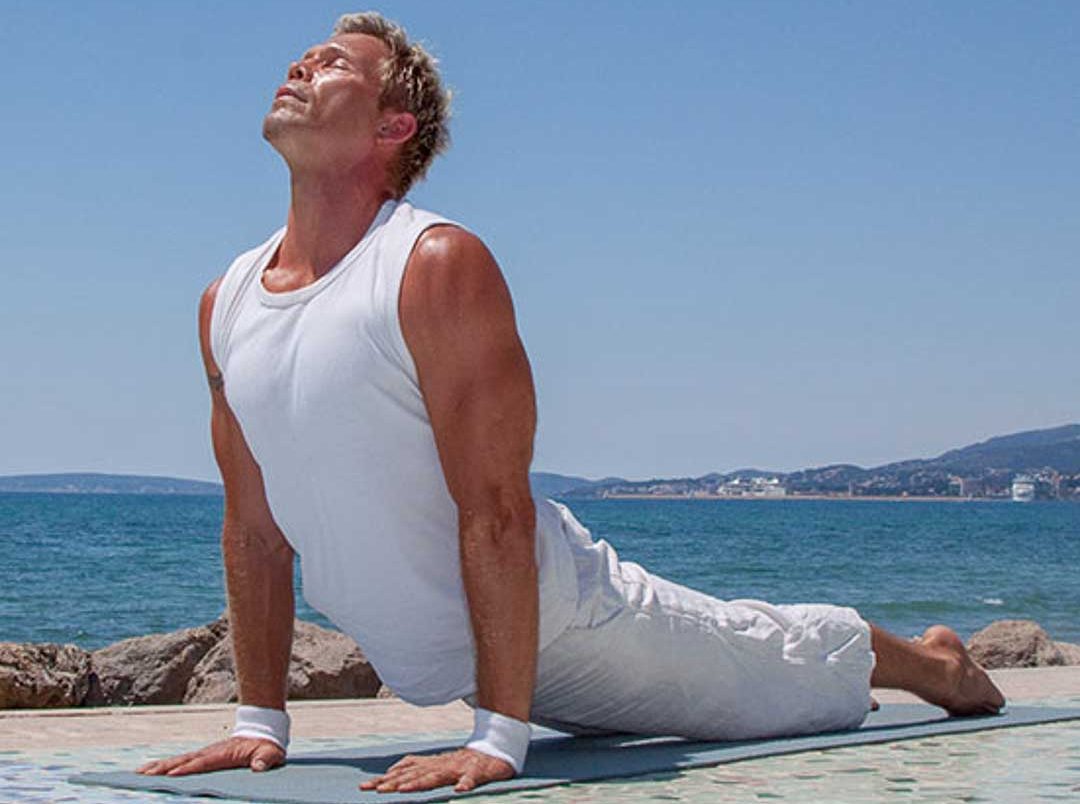 Yoga is easy to learn with Frank-André!
Challenging, but really fun!

Because Frank-André has had a lot of fun with yoga since he was 18 years old. LOTS of! He himself has his severe speech impediment (stuttering).
Yoga and breathing techniques successfully treated and
As you can see in the video , the BodyArt-Yoga he developed is designed more for technique than for esotericism.
It focuses more on learning the challenging techniques properly rather than chanting to the gods.

“Only a rolling stone does not gather moss”

Yoga is predominantly mental training , because serenity and the strengthening and control of concentration are systematically practiced,
but it always has the body in mind.
It is said that yoga is more than 6,000 years old and that there are said to be up to 5000 forms of yoga, but what is certain is that yoga originated in India and came from Hinduism and Buddhism.
Of the thousands of forms of yoga, some focus on the body and breathing exercises, while others focus more on mental focus.
Born from an ancient tradition, with dogmas and a religious background, yoga has now achieved cult status and has mutated into a business model. Yoga studios are springing up like mushrooms, and every Hinz und Kunz receives his yoga teacher license after a four-week “training”.
During Frank-André’s
own 38 years of yoga practice
but new ways of teaching yoga opened up to him.
He is not only able to teach you YOUR own individual yoga,
Frank-André can teach you how to enjoy yoga.

If you click on this video we will play the video, load scripts on your device, store cookies and collect personal data. This enables [Google Ireland Limited, Irland] to track activities on the Internet and to display advertising in a target group-oriented manner. There is a data transfer to the USA, which does not have EU-compliant data protection. You will find further information here.

(Level 1)
Frank-André Berkel developed the “Golden 8” especially for beginners . This consists of the latest sports medicine findings from the
classic yoga, Pilates, BodyArt, Thai Chi, DO IN, and classic physiotherapy.
Similar to a “sun salutation” in yoga, eight exercises (asanas) form a sequential sequence of isometric exercises (held positions) that build on one another, which you can learn from Frank-André and should become part of your daily training –
because only a rolling stone does not collect moss!

The way to an even more intense physical experience.
Have you been practicing yoga for a long time or even professionally and would you like to work even more intensively on your techniques? Are arm balances such as the “crow” still very difficult for you? With the knowledge and the
right techniques
With Frank André you will experience a new and impressive quality in the execution of your yoga. To actually use this “new” is fantastic – you will feel and see… and love it!

“As an experienced yoga teacher, I learned more in one hour with Frank-Andrè than in any other training program before. His knowledge of the body and his physiotherapeutic experience make his work unique!”
Petra Knuf, 68
internal yoga instructor

“I am a very spiritual, but not a religious person or spiritualized esotericist!
Both of my feet are firmly planted on the ground and I take regular training courses.
My yoga is without a religious background, esoteric superstructure and “Om”.
Please don’t misunderstand me here,
the “Om” is beautiful , but not intended for me as a spiritual beginning or conclusion of my teaching.”
Her

BodyArtYoga
“I miss the times here in Wiesbaden very much! I have never experienced this perfect symbiosis of deep relaxation and sport without (pseudo-)esotheric frills anywhere else. Body control in its purest form – simply divine. Thank you for the great hours – always happy!
Simply the best! ”

“Frank got me into yoga a year ago.
Compared to other yoga trainers, he impresses with his knowledge of anatomy, physiology and physiotherapy.
He guides each student individually within the scope of his possibilities and possible previous illnesses.
In my opinion, his way of leading with words is well above average and gives me a new quality of yoga that I have not experienced with other trainers.
So five stars and two thumbs up from me!”

“Since I had both my hips AND knees replaced,
I lost confidence in my joints and became more and more immobile.
I came to Frank-Andre on my 86th birthday and felt MUCH better after the first treatment
and the pain is almost gone!
With Frank-André I regained a level of mobility and stability that I had never known before.
Thank you, Frank-André!”